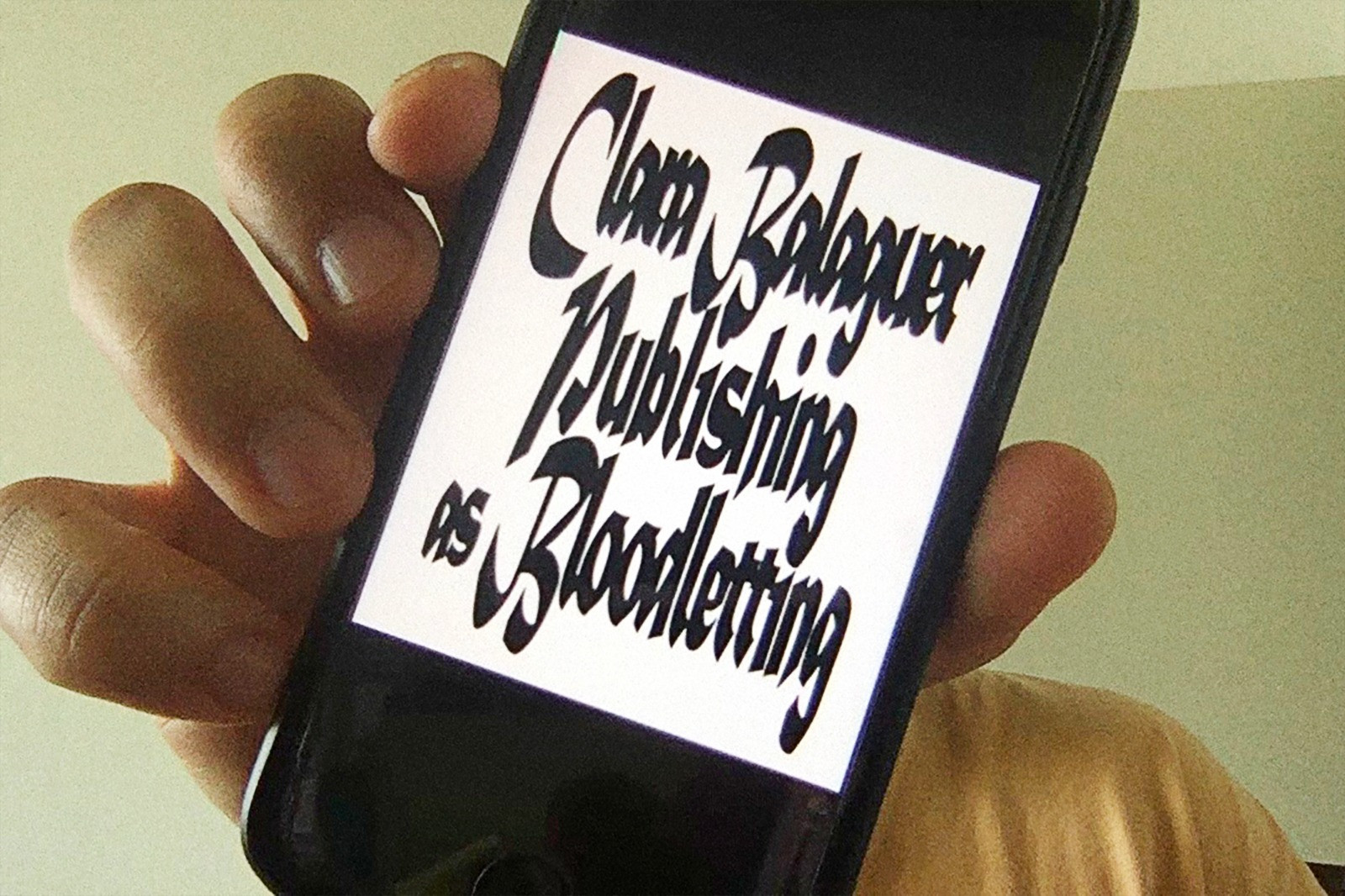 Migratory Choreography for a Conversation (Take 2)

or Second Attempt at a Bleeding Edge Choreography for a Conversation

Another edition of Publishing as Bloodletting, a two-fold essay and play about the politics of circulation in the body public, written from the perspective of a migrant publisher. As this publication oscillates between the visible (text) and the audible (voice), so must the conversation around it also be structured. The play has been performed in multiple iterations: as a monologue, with volunteer readers, with the original cast of friends, and most recently, in radio TV format. This bleeding edge issue is the second attempt to perform a lecture choreography that experiments with non-simultaneity of sight and sound in public speaking. The conversation about the essay-play will attempt to move, literally at times, through what has been read, what is being seen, and what can't be heard. The first rehearsal was not entirely successful due to Nazi zoombombers, unfamiliar broadcast software, and mild exhaustion of the lecturer.

This event is part of the unauthor's programming for Unbound Libraries Worksession, organized by Constant.

CLARA BALAGUER (Makati City, Pisces Metal Monkey) is a  cultural worker. From 2010 to 2018, she articulated cultural  programming with rural and underserved communities in the  Philippines through the Office of Culture and Design, a  residency space and social practice platform. In 2015, she co- founded Hardworking Goodlooking, a cottage industry  publishing hauz interested in horror vacui, thickening research  on the post- (or de-) colonial vernacular, collectivizing  authorship, and the value of the error. Currently, she  coordinates the Social Practices department at Willem de Kooning  Academy and teaches Experimental Publishing at Piet Zwart  Institute in Rotterdam. Frequently, she operates under  collective or individual aliases that intimate her service in a  given project, the latest of which is To Be Determined.

TO BE DETERMINED is an undocumented organization that has  recently migrated to the Netherlands from the Philippines and  other places, assuming a new name and identity. It is curious  about models of collectivizing authorship (be it credited, anonymous, or divested), underground railroads (in plain sight)  to institutional access, territory constructed between repose  and transit (including languages spoken by any inhabitants),  and the decolonization of cultural work through the lens of the  contemporary (post-colonial) vernacular. It is currently molting  or in the process of determining how it must operate within a  foreign landscape. But what is clear, at this point in time, is that  TBD is (still) comprised of sleeper cells and yet-to-be- determined networks that activate and deactivate in response  to external factors: abundance to be distributed, urgencies to  be addressed, or leisure to be. When prompted, TBD identifies  as a social practice performance.

"Oh, Kitty! how nice it would be if we could only get through into Looking-glass House! I'm sure it's got, oh! such beautiful things in it! Let's pretend there's a way of getting through into it, somehow, Kitty. Let's pretend the glass has got all soft like gauze, so that we can get through. Why, it's turning into a sort of mist now, I declare! It'll be easy enough to get through — ' She was up on the chimney-piece while she said this, though she hardly knew how she had got there. And certainly the glass was beginning to melt away, just like a bright silvery mist "

PUB and the GRA Bookbinding workshop are hosting a new series of online workshops and talks dedicated to everyone interested in experimental publishing as a way to communicate and share during times of isolation. A delocalized printing and binding network has been created and will be nurtured, informed, shrinked and expanded through the different sessions. We think we can question our ways of production while we are separated, and we are willing to share ways of doing that can make us feel each other, beyond the screen, or melting its surface, just like a bright, silvery mist.

For the fourth edition of PUB ePUB, we will explore the publishing medium as a threshold between worlds ✩ We understand publishing as a door or physical encounter with new realities, knowledge, and concepts that come into a frame to develop new ways of community-making. We are interested in highlighting the concept of transmission and borderline to formulate the idea of publishing mediums as liminal devices that facilitate transference to the otherness.

In PUB we are interested in possibilities of publishing as a mediator for new discourses, as a way of resistance and also as an artistic practice, ✩ This workshop will be developed in different online sessions by local and international guests from different fields whose body of work explores empirical ways of publishing, new narratives, content development and relevant artistic practices for the field, always focusing in delocalizing production and possibilities to produce during social distancing times. 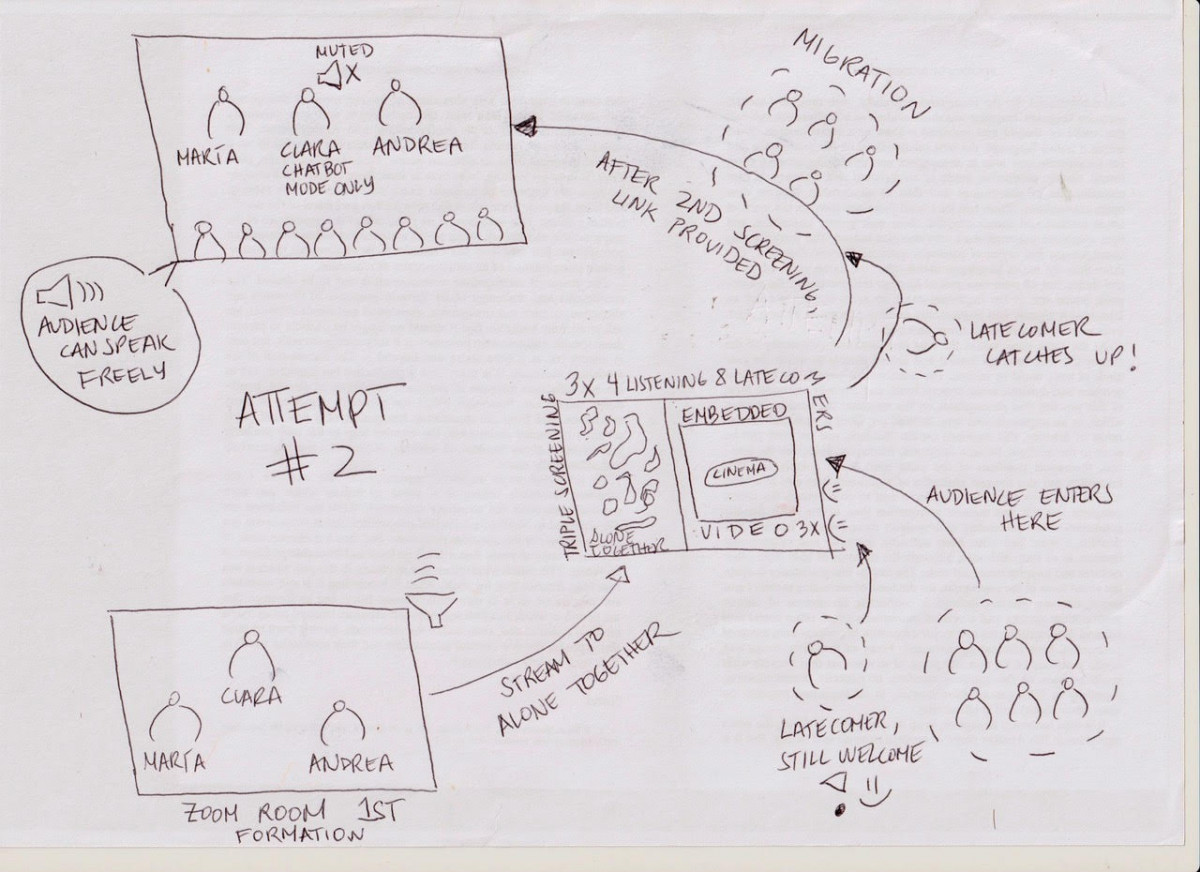 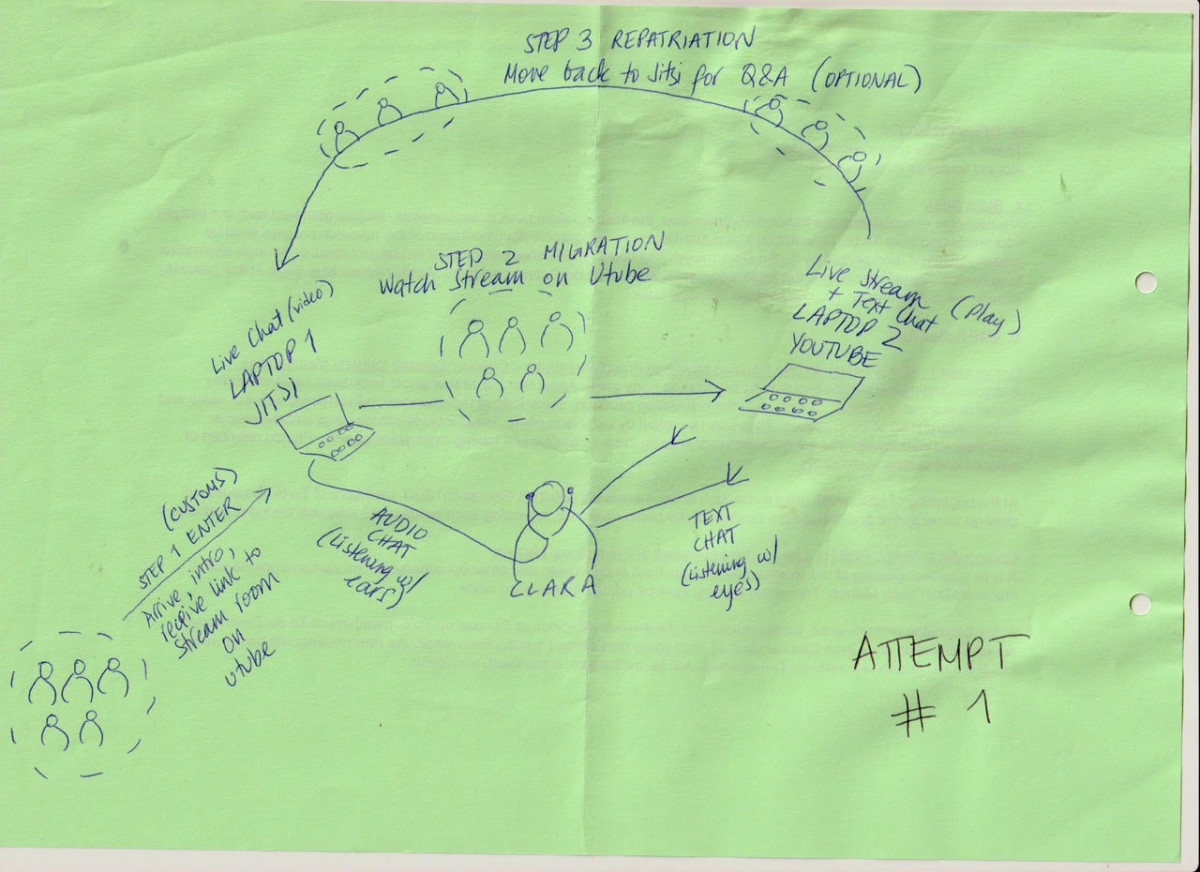